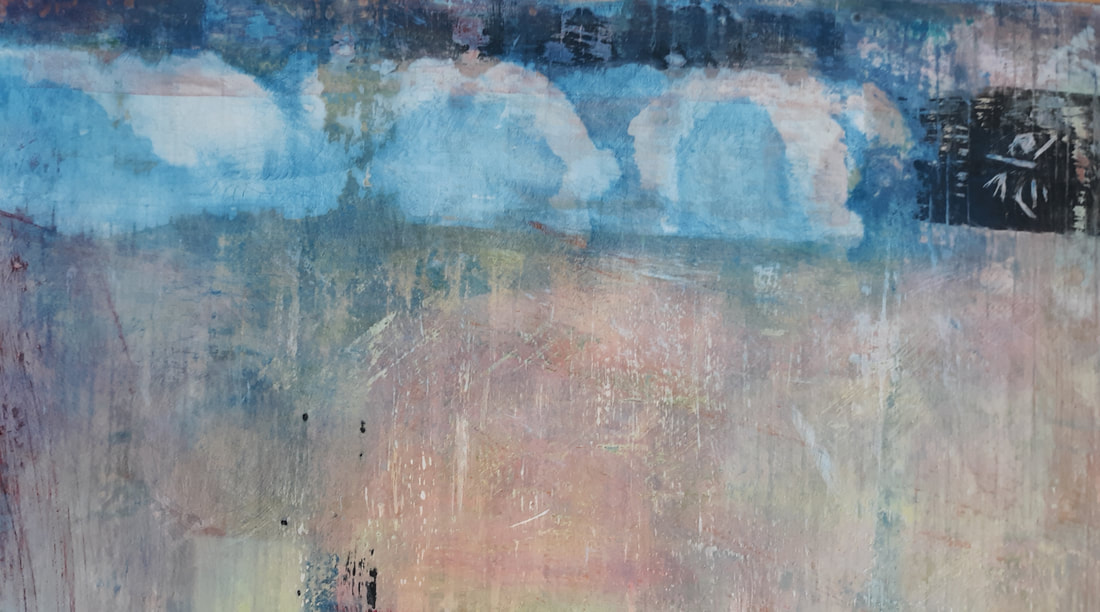 Christchurch. Ash Wednesday. Mixed media.
Detail. Christchurch. March 14 2019. Mixed media.
Dios todo lomira
The medium for this series of work (2019-2020) is primarily milk paint, chalk paint and watercolor in that order. Some of the work on this page was created in response to man's inhumanity to man, and some was created during an internal conversation with myself while navigating stormy waters.  As for the political pieces; the texture and hues of the milk paint resonate symbolically with the tone of the times, what feels to be the 'twilight of sub humanity,' a downward spiral into hell on earth, the extent of the violence accelerating exponentially. We seem to be moving into darker and darker days, and I do not believe it has only to do with the power of media to expose the horrors of man's inhumanity to man. As one who was introduced to the classics as a young reader, the likes of Voltaire, I had once believed that we were moving up the spiral as a species. However, the last decade, the impact on populations worldwide, driven to the brink by climate change, and all that comes with it, e.g. the recent pandemic, my optimism has begun to fade. As an artist I look to my passion to create, to speak with color and form, to express what can't be said with words, and to be part of a creative movement to change.

This medium (milk paint primarily) is one that continues to intrigue me as an artist, one I began working with only 15 years ago. At the same time, it is poignant that some of our earliest ancestors used this same formula for their cave paintings many thousands of years ago. The irony is that we seem to be digressing as a species, far beyond that of our oldest ancestors who must have understood the value of community or we would not be here today.

Author and Nobel Laureate Toni Morrison warned that "Language can never ‘pin down’ slavery, genocide, war. Nor should it yearn for the arrogance to be able to do so . . its force, its felicity is in its reach toward the ineffable.” Yet it seems, it is imperative that we continue to strive to find a way to express ourselves, to understand, or to purge ourselves of the intensity of our thoughts and feelings. It is our humanity that preserves; searching for a way to begin the conversation in spite of the limits of verbal dialogue, that falls short in part because we have become numb to it, and in part because of our ability to survive in isolation. When it comes to the question of the hell that fellow human beings are bearing, a hell we are either supporting, condoning, or failing to challenge - the inhumane treatment of victims of unspeakable violence, begging those who could help, for help, only to be met with more violence – the answer falls despicably short of the ideals of humanity, set forth with the hope of our founding mothers and fathers, of the basic tenets of religious and spiritual doctrines worldwide.  This series is my attempt to express what cannot easily be said, because we have strayed so far as a nation, to call, through abstract forms what so many cannot otherwise hear or see.

This series of work is titled, Dios todo lomira (God sees everything), and was  inspired by a photo in the New York Times of a small boy, living in poverty in Mexico, on the wall of his bedroom, were written these words. His hope and the faith so profound. His belief in a  better world, inspired this series, back before covid, when mass shootings and the inhuman conditions at the Southern border, and borders everywhere, were everyday news.

How do we keep from becoming immune to the violence that so many innocents suffer the world over? Violence that we as Americans can help prevent by the simple act of casting a vote. Prior to Covid-19, it was impossible to avoid the daily headlines reporting the suffering beyond our Southernmost border.

The most recent work in this series, the Rose Circle and Gold Cross, were painted during the first few weeks of the Cov19-outbreak and spread of the virus here in the United States. Like so many I felt myself in a downward spiral from so much fear; the massive hoarding, isolationism, and what seemed to be a return to a primitive barbarianism on the part of so many. My painting during that time growing more dark and gloomy. I decided that I had a responsibility to shift the paradigm within myself, from dark to light; embody hope. Out of that came a painting of pastels and the ancient symbols of the cross and the circle. Not to be taken narrowly, the circle and the cross predates Christianity by thousands of years and is in fact an alchemical symbol found in the writings and teachings of indigenous peoples, Western civilization and organized religion worldwide, from Ancient Africa (protection and childbirth), Ancient Alchemists (quinta essentia), Amerindian (the Lodge Cross, Sacred space, a cosmic Centre). The "Cross in circle: Solar mobility ; the wheel of change; the wheel fortune." (J. C. Cooper, 1978).